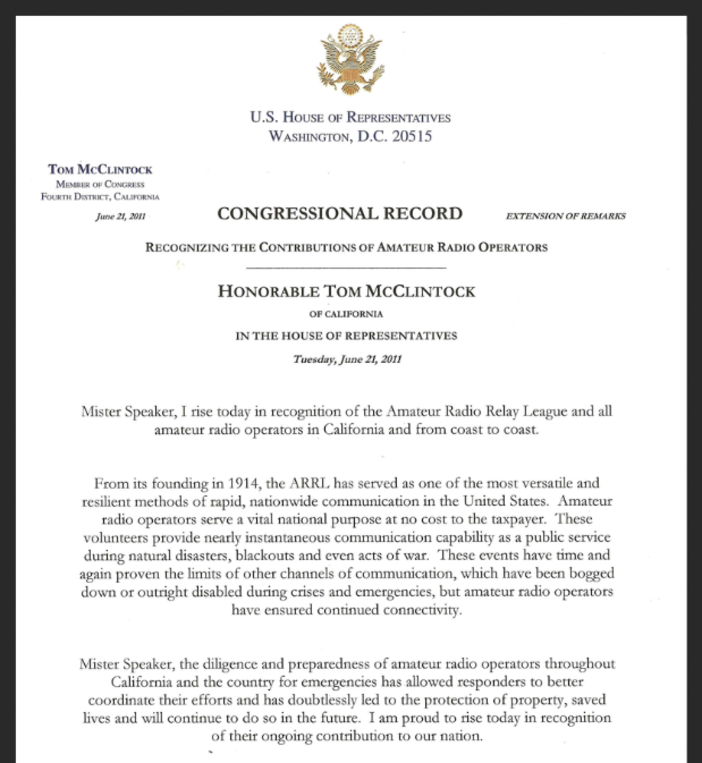 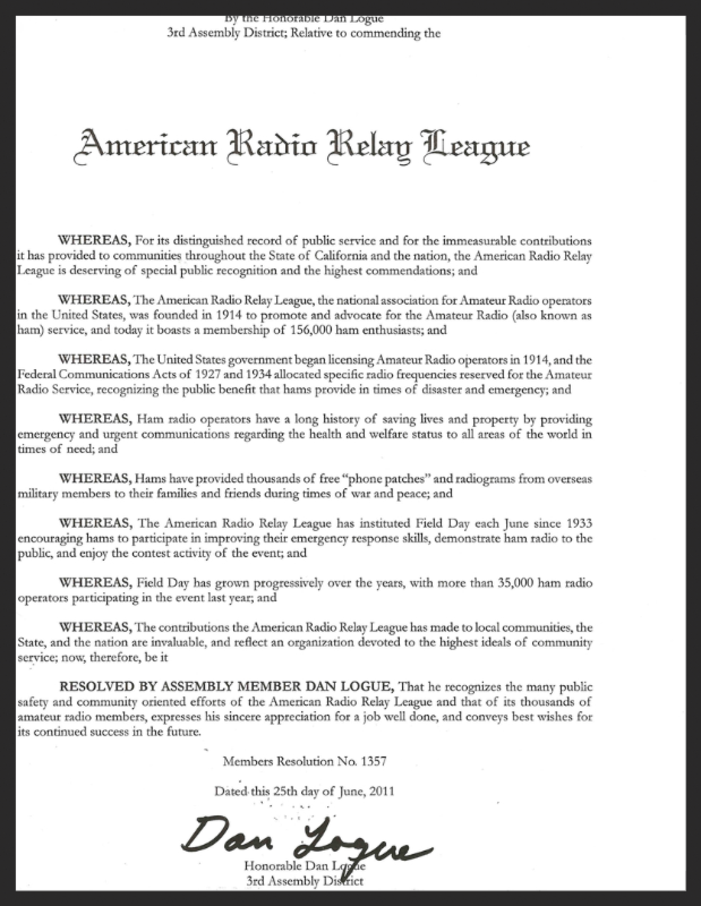 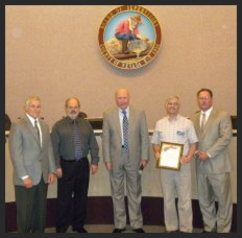 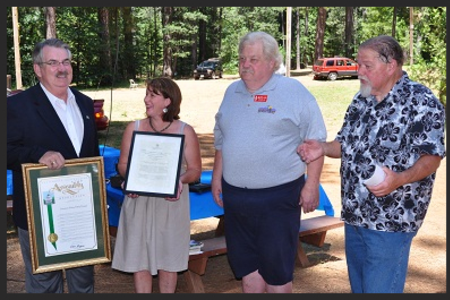 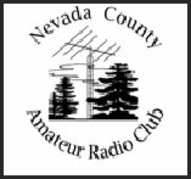 In 1960, Phil Keast formed the Nevada County Amateur Radio Club with seven members. Today the club remains small, with about 50 members, but provides a critical function for local governments, the Red Cross and other community organizations. Amateur radio operators, or "hams" are not only hobbyists but also volunteers who provide emergency communications during local emergencies and disasters.
During the 49er Fire in 1988, Nevada County hams set up communication equipment in their vehicles, posted themselves all over the affected or projected routes of the fire, and helped firefighters track the movement of the fire.
The group participates regularly with Nevada County and local fire districts in annual emergency training exercises.
The Nevada County Board of Supervisors congratulates the Nevada County Amateur Radio Club on its 50 year anniversary, thanks them for their important service to the community in times of crisis, and wishes its members many years of enjoyment and enrichment in the field of radio.


Field Day 2011 was slightly different this year than most years. This year the club broke new ground and ran on 100% natural power, solar, as opposed to commercial power. The solar setup was graciously donated and supported by Sierra Solar. However, the highlight of the day came about 11am when the Hon. Dan Logue, California State Assemblyman for the 3rd District, and Kim Pruett, local contact for US Representative Tom McClintock, made presentations to the club and the ARRL.


The presentations were in recognition of the service Amateur Radio plays in the event of emergencies, such as the 49er Fire in 1988 when the NCARC played an essential role as spotters for the fire service.For a video of the presentation click<a>here</a>. Kim Pruett made her presentation first, giving us an explanation of how having something read into the Congressional Record is done. Then Assemblyman Logue made his presentation. The text of each is as follows:

By the Honorable Dan Logue

WHEREAS, For its distinguished record of public service and for the immeasurable contributions it has provided to communities throughout the State of California and the nation, the American Radio Relay League is deserving of special public recognition and the highest commendations; and
WHEREAS, The American Radio Relay League, the national association for Amateur Radio operators in the United States, was founded in 1914 to promote and advocate for the Amateur Radio (also known as ham) service, and today it boasts a membership of 156,000 ham enthusiasts; and
WHEREAS, The United States government began licencing Amateur Radio operators in 1914, and the Federal Communications Acts of 1927 and 1934 allocated specific radio frequencies reserved for the Amateur Radio Service, recognizing the public benefit that hams provide in times of disaster or emergency; and
WHEREAS, Ham radio operators have a long history of saving lives and property by providing emergency and urgent communications regarding the health and welfare status to all areas of the world in times of need; and
WHEREAS, Hams have provided thousands of free "phone patches" and radiograms from overseas military members to their family and friends during times of war and peace; and
WHEREAS, The American Radio Relay League has instituted Field Day each June since 1933 encouraging hams to participate in improving their emergency response skills, demonstrate ham radio to the public, and enjoy the contest activity of the event; and
WHEREAS, Field Day has grown progressively over the years, with more than 35,000 ham radio operators participating in the event last year; and
WHEREAS, The contributions of the American Radio Relay League has made to local communities, the State, and nation are invaluable, and reflect an organization devoted to the highest ideals of community service; now, therefore, be it
RESOLVED BY ASSEMBLY MEMBER DAN LOGUE, That he recognizes the many public safety and community oriented efforts of the American Radio Relay League and that of its thousands of amateur radio members, expresses his sincere appreciation for a job well done, and conveys best wishes for its continued success in the future.

Honorable Tom McClintock of California In the House of Representatives

Mister Speaker, I rise today in recognition of the Amateur Radio Relay League and all amateur radio operators in California and from coast to coast.
From it's founding in 1914, the ARRL has served as one of the most versatile and resilient methiods of rapid, nationwide communication in the United States. Amateur radio operators serve a vital national purpose at no cost to the taxpayer. These volunteers provide nearly instantaneous communications capability as a public service during natural disasters, blackouts, and even acts of war. These events have time and again proven the limits of other channels of communication, which have been bogged down or outright disabled during crises and emergencies, but amateur radio has ensured continued connectivity.

Mister Speaker, the diligence and preparedness of amateur radio operators throughout California and the country for emergencies has allowed responders to better coordinate their efforts and has doubtlessly led to the protection of property, saved lives, and will continue to do so in the future. I am proud to rise today in recognition of their ongoing contribution to our nation.