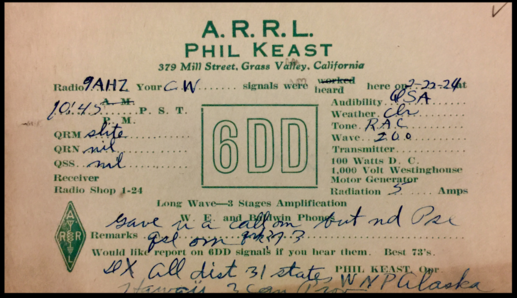 The crystal of this 1919 detector owned by Stu Cohen, N1SC, is seated in a disc of alloy called Wood's metal. According to the 1913 edition of Webster's Dictionary, Wood's metal is a fusible alloy consisting of one or two parts of cadmium, two parts of tin, four of lead, and seven or eight part of bismuth. It melts from 66 to 71°C. [Brennan Price, N4QX, Photo]

The diary was donated as a club history item to the NCARC by Jim Heath W6LG. 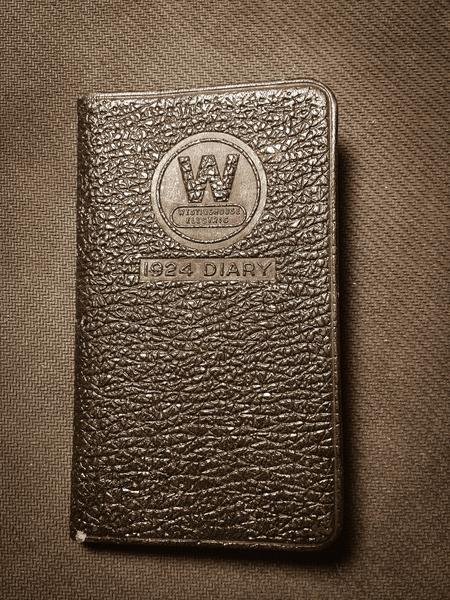 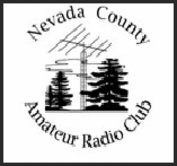 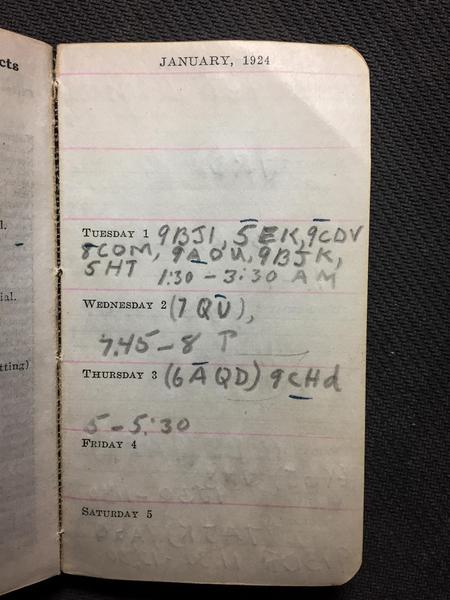 In 1927, Keast purchased a kit and constructed this AM radio. The kit consisted of all the components needed to make a complete radio, including the earphones, which are still with the set. One of the tuning dials has listed the stations he could pick up with the radio. With a hardwood cabinet, it used eight tubes and was refurbished by Rudi Mangold, HB9BU. [Kenneth Smith, KR6MM, Photo] 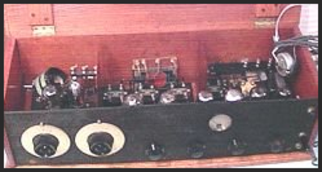 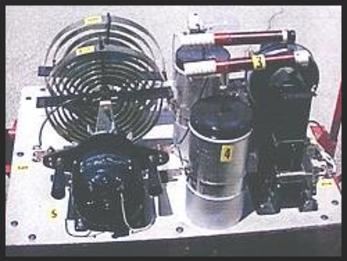 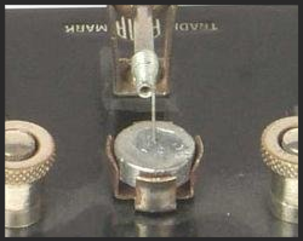 The First Radio Station in the Gold Country
by Kenneth A. Smith, KR6MM

As a teenager after World War I, Phillip Keast, originally licensed as 6DD, built a spark gap transmitter that a century later provides inspiration to today's hams.

Phil Keast was the young son of a miner, living in Grass Valley, California, in the early 1910s. When he was 10 years old, Phil's family was in Oakland, California to visit relatives and the family across the street from his relations had a crystal receiving set. There, Phil could hear NPJ, the US Navy station on Yerba Buena (Goat) Island, communicate with the ships coming into San Francisco. All communication was done in Morse code with spark transmitters. From that beginning, radio became a fascinating hobby for Phil.

In 1914, Phil made a small crystal detector set of his own using a "cat's whisker" on a piece of galena set in molded Wood's metal. He put up an antenna in the trees near the North Star Mine where his father worked and listened. Before Phil left the North Star Mine site, he began experimenting with a small radio transmitter, trying out a Ford automobile coil with a stationary spark gap. It's not known how many contacts he made with that first transmitter, but it was the first radio station in the Gold Country.

After the United States entered World War I early in 1917, all civilian radio operating--both transmitting and receiving--was forbidden. In November 1919, a year after the war ended, Phil applied for a license from the Department of Commerce and received the call sign 6DD. His license application was signed by Guglielmo Marconi, the inventor of the radio telegraph system. His call is visible on the spark gap transmitter he made after the war using a 1 kW Thordarsen transformer with 25,000 volts from the secondary winding. The transmitter used two Leyden jars for capacitors and a synchronous motor with two rotating spark gaps. It had kickback prevention coils--now called RF chokes--to prevent backflow of the generated high frequency waves to the transformer.

Phil's spark gap radio was lost after he passed away in 1990. It was found eight years later at the North Star Mine Museum, mixed up with some discarded electronic material. It was initially thought to be a discarded X-ray machine, but it was noted by the curator of the museum that the strange apparatus had the odd marking "6DD." Rudi Mangold, HB9BU, of the Nevada County Amateur Radio Club, restored the transmitter to operating condition before he, himself, passed away in 2001. The transmitter's Leyden jars could not be found, so Rudi built two new jars using high density polypropylene coils covered by aluminum foil.

The transmitter has a resonating circuit with a wavelength of 220 meters, or 1360 kHz. It is equipped with a 40 W light bulb dummy load antenna and is keyed by a relay, since the power required by the transformer would burn up a straight key.

I believe that Phil's spark gap transmitter is one of six in existence and one of four that is in operating condition. It is on permanent display in the lobby of the Nevada County Rood Building. Phil passed away in 1990 and his family graciously gave NCARC permission to apply for a new club station call: W6DD.

Kenneth A. Smith, KR6MM, has been a ham since 1992, earning his first ticket at the age of 75. He joined in the US Army Air Force in 1940 and saw active duty as a navigator--and later as commander of an engineering construction squadron--in World War II, the Korean Conflict and in Viet Nam before retiring from the US Air Force in 1970 with the rank of colonel. He upgraded to Amateur Extra in 2001.

From the collection of N2BTD. Thanks Brian 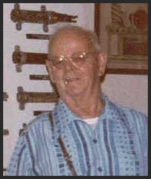 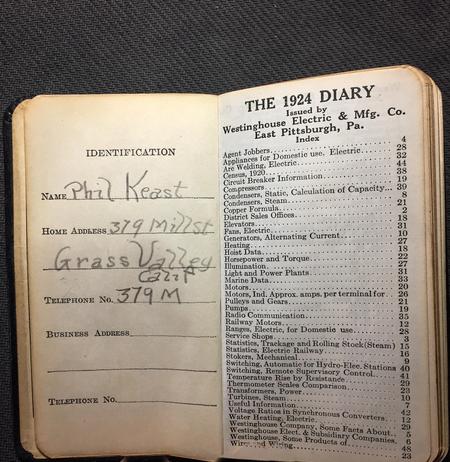 Keast's second transmitter, constructed in 1919, uses a 1 kW Thordarsen transformer with 25,000 volts from the secondary winding. The transmitter used two Leyden jars for capacitors and a synchronous motor with two rotating spark gaps that put out a signal in the vicinity of 1360 kHz. [Kenneth Smith, KR6MM, Photo]